While I use Raspberry Pi for various things, getting them to run old arcade games was always up there in the list. Initial experiments with xboxdrv and MAME got me a system capable of running the arcade game that a friend and I would cycle 3 miles down the canal to the arcade to play, and relieve ourselves of several weeks' pocket money at one sitting. To the extent that the chap in the arcade actually threw us out a couple of times because he was worried our parents would come round demanding to know why he'd let their sons fritter away so much cash on something so irrelevant as an arcade game.

Having played around with Carles Oriol's ChameleonPi, which was great, I was able to play a load of my old BBC B games, in slightly less pleasing form using the fuse zx spectrum emu. This always rankled a bit. The R-Pi 1 model B needed you to install RiscOS to run an emulator capable of simulating the mighty BBC.

Gave up on that for a bit, but now as the proud owner of a Raspberry Pi 2, I did wonder if it'd be meaty enough to run a few Playstation 1 games which used to entertain other family members who were working very odd shift patterns in 1999. And lo and behold - it did, once I installed RetroPie and messed about with it a bit. The biggest pain was PSX button re-mapping, which (if anyone is interested) can be solved for P1 at least with the following file:

So anyway - to the point of this post, I wondered if the BBC B would now run at a decent rate on the Pi 2 *without* having to run RiscOS.

To compile it, you can start from vanilla Raspbian (I haven't tried this) or from RetroPie (which I have). The UNIX variant of BeebEm is what you need:

Then transfer these to the pi via SSH and...

ROMS (Basic, OS1.2, Acorn DFS etc) are all bundled with it. It does not require X-windows, SDL alone will do, so this install method should work on a headless Raspbian distribution. F12 gets you a system menu which you can use [TAB] and [ENTER] to navigate.

Download the .ssd (BBC Micro Disk Image) of your choice from http://www.stairwaytohell.com/bbc/archive/diskimages/reclist.php?sort=name&amp;filter=.zip

Next step was to set up EmulationStation on the RetroPie to have a BBC Micro option.

And added a beeb directory to /home/pi/RetroPie/roms to put my .ssd files in. 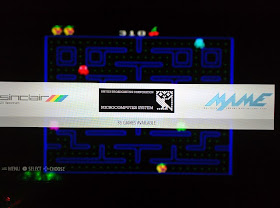 For some reason beebem doesn't shut down cleanly via this method - it needs hard powering off which isn't ideal. It's probably something to do with the EmulationStation startup script command, but I'll work that out later.

While it seems that the UNIX BeebEm load/save state options in the F12 menu don't work (they crash the emulator), and sound support is pretty patchy (toggling to a new samplerate puts sound back for a bit, then it disappears again), I also had some issues with Caps Lock which was preventing my playing some games like Thrust, Deathstar etc.

Windows/Mac BeebEm have a modification to map CapsLock/Ctrl to A/S, but the UNIX version doesn't. Nor does it have the capability to accept Preferences.cfg files nor user-defined keymaps.

Game Over? Not quite.

Having looked at the source code in BeebEm for UNIX, the file to modify is sdl.cpp (in the /beebem-0.0.13/src directory). This file contains the keymapping from the UNIX SDL library keymap to the BBC Micro one. Interestingly there are a load of comments in there about how Caps lock handling is total rubbish in SDL (no key-up event or somesuch, plus the usual developer swearing in the comments). As a result the author has tried to map Caps to Alt Gr, but that wasn't working on my keyboard for some reason. If you have any keyboard issues you can probably fix them by editing this section of the file if you know the SDL Key Codes ( last column in https://wiki.libsdl.org/SDL_Keycode ).

Modification of the following lines in sdl.cpp worked for me - I just modified the SDL key to be SDLK_RALT for the right Alt key - (as this didn't exist on the beeb) About 80% of the way through the file you find this section:

And I then commented out the two CAPS LOCK lines, replacing them with the correct SDL key for Right-Alt.

BeebEm then requires a quick recompile - ./configure followed by make and make install as per the original install instructions.

And I could use Right Alt instead to turn left in Thrust. Unplayable, but working.

Who needs keyboards anyway? - I was able to then use xboxdrv (as I use wired xbox360 controllers) to map to the right ALT key. Worked like a charm, only thing I need to do now is work out how to call a custom script to load the games rather than the direct loading approach in EmulationStation.

I wrote a little command line script to launch games manually from the prompt just to see. It identifies the controller by USB id (use lsusb to work this out if you need to):

Then sudo ./rungame.sh Thrust would launch Thrust with my xbox360 controller driving it. :-) (sudo is needed to kill xpad, otherwise xboxdrv doesn't work)

Note - you will need a working/modified "Thrust" xbox keymap file. I saved the below as Thrust.xbox in the /home/pi/RetroPie/roms/beeb directory:

This approach works pretty well, only problem is that I have to manually kill xboxdrv off after running games. (ps -ef | grep xboxdrv and sudo kill <whatever the root process id is> followed by CTRL-C)

I will work out how to jig all this up so I can run it from EmulationStation soon. Been too busy rewriting keymap files for ChuckieEgg and Repton this afternoon.

Hopefully that helps somebody!